17 Athletes to Watch at the 2020 Tokyo Olympics

In the face of many obstacles, the Tokyo Olympics are finally here.

With the Opening Ceremony kicking off this Friday, the world’s premier athletes will step up to the plate after the Games were postponed last year due to the COVID-19 pandemic.

Among those participating, some are already household names with multiple Olympic medals under their belt, while some will be partaking in their very first Olympics in their career.

And some will be postponing their debuts: newcomers such as tennis’ Coco Gauff and track and field’s Sha’Carri Richardson will not be able to compete. On Sunday, Gauff had to withdraw from the Games due to testing positive for COVID-19, and early in July, it was reported that Richardson also could not compete due to testing positive for THC after her Olympic trials. On Monday, one of the alternates for the U.S. women’s gymnastics team also tested positive for COVID-19, though they did not specify who due to privacy concerns.

However, the recent spike in COVID-19 rates have raised some concerns with how the Olympics will run this year. Earlier this month, it was announced that there will be no spectators.

This year, viewers will also witness the debut of surfing and skateboarding, two of the new sports added to the program.

Here, WWD takes a look at all the athletes to watch at the Summer Olympics. Read on for more. 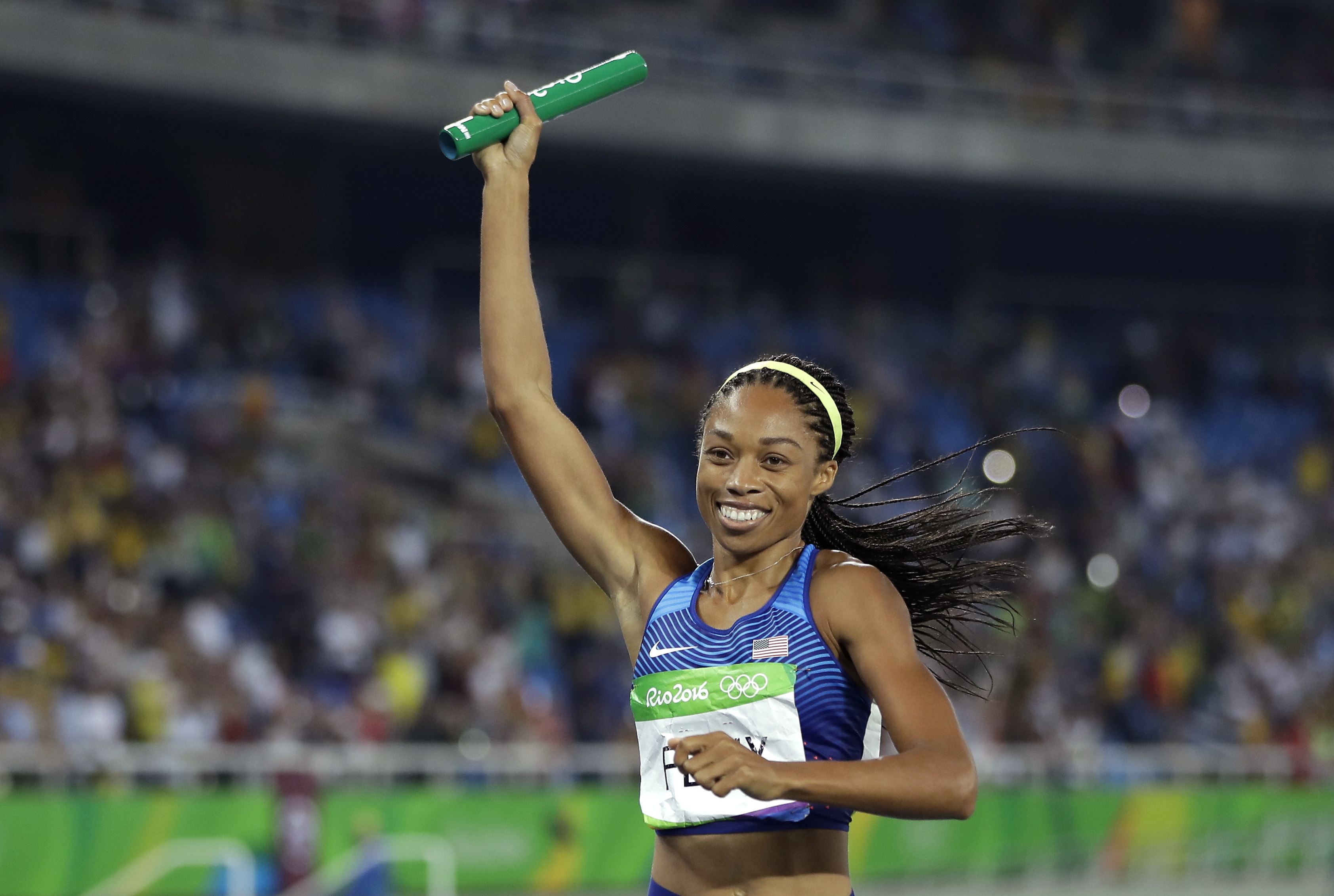 United States’ Allyson Felix celebrates after winning the gold medal in the women’s 4×400-meter relay final during the athletics competitions of the 2016 Summer Olympics at the Olympic stadium in Rio de Janeiro.
AP

Felix is back for her fifth Olympic Games, and her first since giving birth to her first child, a daughter named Camryn, in 2018. The 35-year-old has won nine Olympic medals, six gold and three silver. If Felix wins another medal in Tokyo, she will be the most decorated female track and field athlete in Olympic history.

Thomas made headlines and took the social media world by storm in June when she set the record for second-fastest woman in the 200-meter dash at the Olympic trials. The 24-year-old graduated from Harvard University, studying neurobiology and public health, where she won 22 conference titles over the course of her three years as a track and field athlete for the Crimson. Thomas said that it was actually Allyson Felix who inspired her to run when she was a young girl.

With the retirement of the famed Usain Bolt, Lyles is emerging as a favorite in the former champion and world record holder’s signature events, especially the 200-meter dash, which Bolt has won at the last three Olympics. The 24-year-old was also expected to partake in the 100-meter dash, but he failed to qualify. Trayvon Bromwell, the winner of that race, is now a favorite to win.

Fraser-Pryce, like Felix and Bolt, is a household name in the world of track and field, especially the 100-meter dash. Fraser-Pryce has won medals for that event in the last three Olympics, including golds in 2008 and 2012 and one bronze in 2016. The 34-year-old is looking to be the first woman to win three Olympic titles for the 100-meter in Tokyo.

Considered the best marathoner ever, Kipchoge is the only man to run a marathon (26.2 miles) in under two hours. The 36-year-old won the gold medal at the 2016 Rio Olympics and is one of the long-distance favorites at Tokyo. 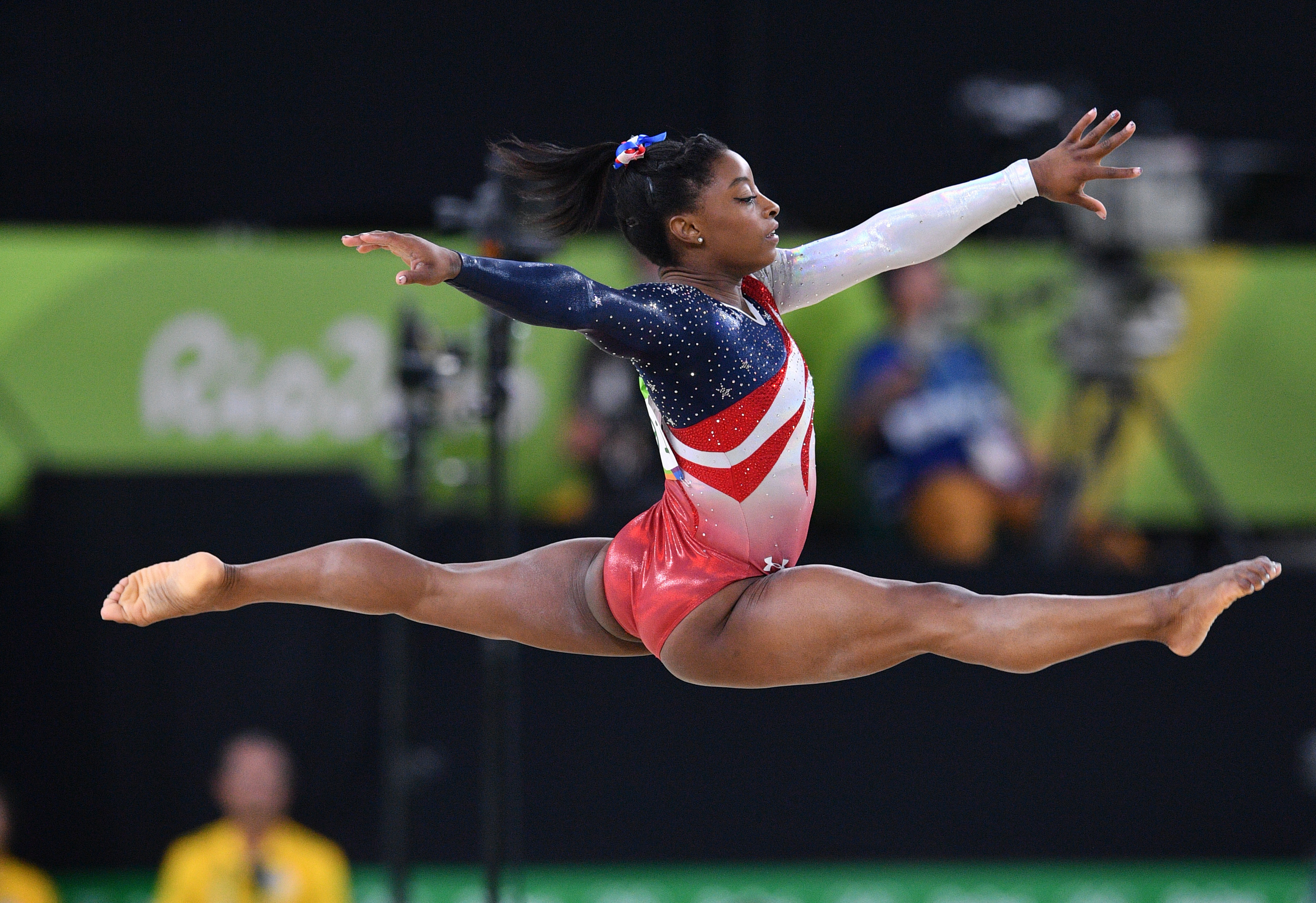 Simone Biles of the U.S. competes on the Floor during the Artistic Gymnastics Women’s Team Final of the Rio 2016 Olympic Games at the Rio Olympic Arena.
AP

The most decorated gymnast in history, Biles has set the bar high for most of her competitors, already etching herself as perhaps the best gymnast of all time. In the 2016 Olympics, which was also Biles’ first, she won four gold medals: in the individual all-around, the team event, the vault and the floor exercise. The 24-year-old fan-favorite is expected to medal in all her events again this year. If she wins gold again in the individual all-around, Biles will be the first woman in 53 years to do so.

Newcomer Lee has also emerged as another favorite to medal at the Games, as she continues to place second behind Biles in most of her events. During the trials, the 18-year-old scored higher in the all-around on the second day, besting Biles. It was the third time in Biles’ senior career that someone else received a higher one-day all-around score. Lee ended up finishing second overall though, but still automatically qualified for the Olympics team alongside Biles.

Manuel made history when she tied Canada’s Penny Oleksiak for the gold medal in the 100m freestyle, while also setting the Olympic record with a time of 52.70 in 2016. In achieving this, the 24-year-old became the first Black woman to win a gold medal in an individual swimming event.

With the retirement of Michael Phelps, the 24-year-old is looking to be the sport’s next big star. At the 2016 Olympics, Dressel won his first gold medal in the 4x100m freestyle relay, and won his second in the 4x100m medley relay for the freestyle leg. Like Phelps, Dressel is also a sprint freestyler and butterflyer. At Tokyo, Dressel could be the third man to win three individual gold medals after Mark Spitz and Phelps. 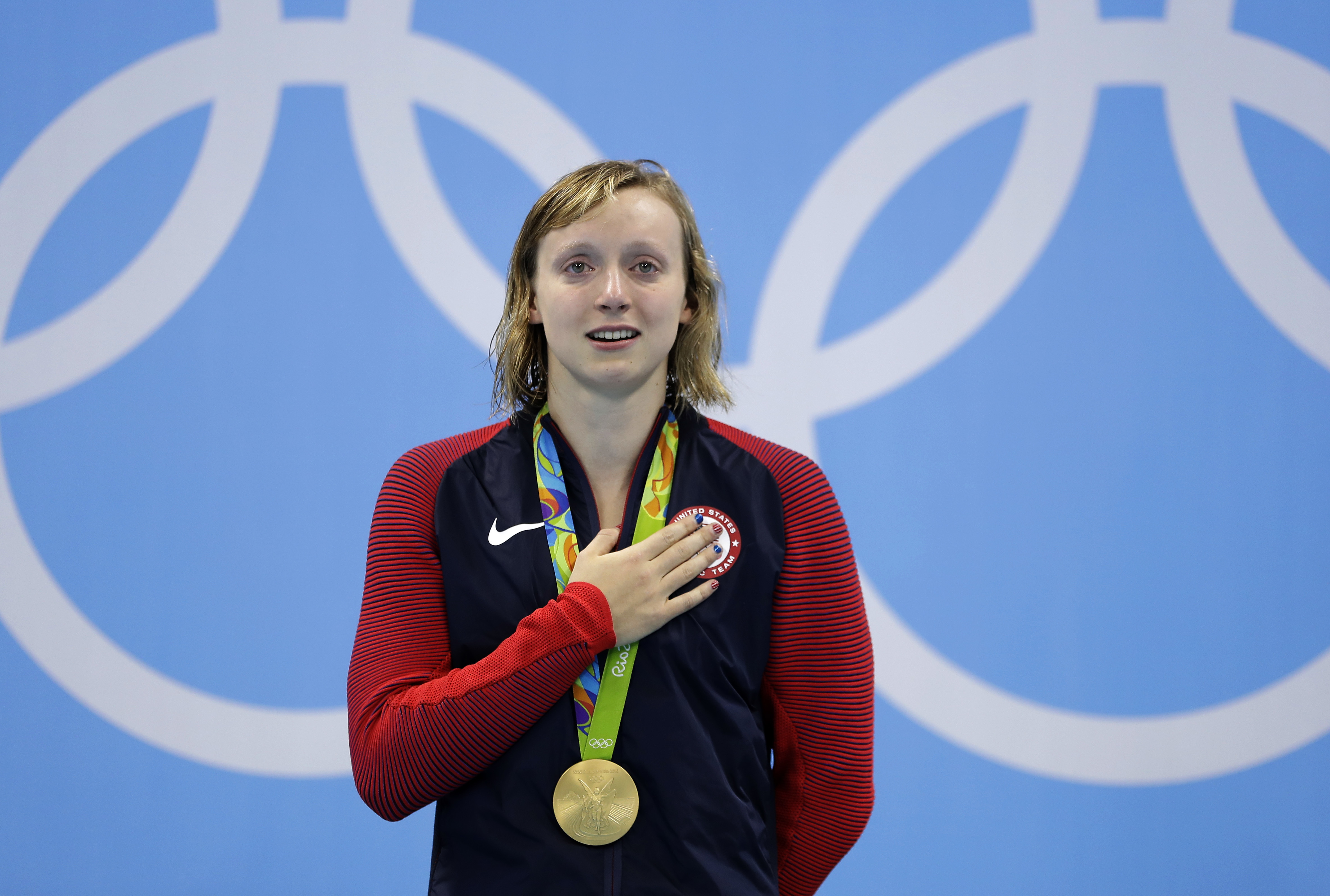 Ledecky emerged as one of the big stars at the Rio Olympics when she took home five gold medals and set two world records (one for 400m freestyle and one for 800m freestyle). In 2016, the 24-year-old won the 200m, 400m and 800m freestyle events, which made her the first swimmer since 1968 to do so. This year, Ledecky is aiming to defend her titles as well as win in the 1500m freestyle, an event that will make its debut on the women’s side.

The 20-year-old has proven to be a big threat as of late, especially to Ledecky. Titmus defeated Ledecky in the 400m freestyle two years ago at the World Championships. Nicknamed “Terminator,” Titmus is also expected to compete in the 200m, 400m and 800m freestyle events. 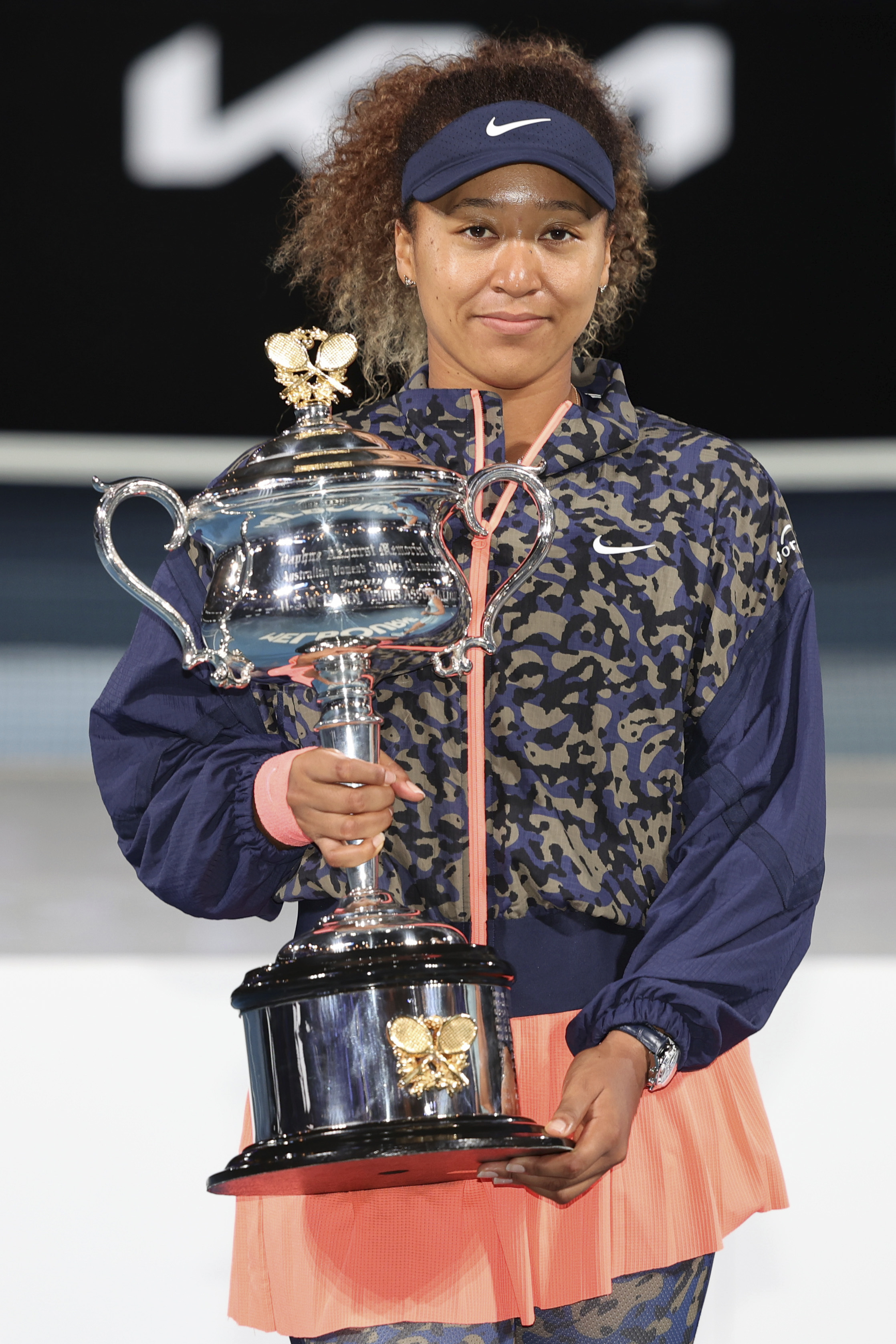 Naomi Osaka of Japan poses for photographs after defeating Jennifer Brady of the U.S. in the Women’s Singles Final match on day 13 of the 2021 Australian Open at Rod Laver Arena, in Melbourne, Australia.
AP

After withdrawing from the French Open and not participating in Wimbledon this year, Osaka looks ahead to competing under the Japanese flag at home. Currently ranked number two in the world, the 23-year-old is the reigning U.S. Open and Australian Open champion for the women’s singles. This Olympics will mark Osaka’s first.

This will be Morgan’s big return to the sport since giving birth to her first child, a daughter named Charlie, in May 2020. If the Games were not postponed, Morgan would have likely missed the Olympics. The 32-year-old has continued to prove that she is one of the best strikers in women’s soccer. Also returning is Megan Rapinoe, Rose Lavelle and Carli Lloyd among others.

With the introduction of surfing to the program, viewers will finally be able to watch some of their favorite surfers worldwide compete against each other. Gilmore, one of the highly decorated surfers, is looking to be one of the favorites this year. The 33-year-old has won seven world titles, more than any of her competitors. In Tokyo, Gilmore will be aiming to edge out American Carissa Moore, the current world champion. 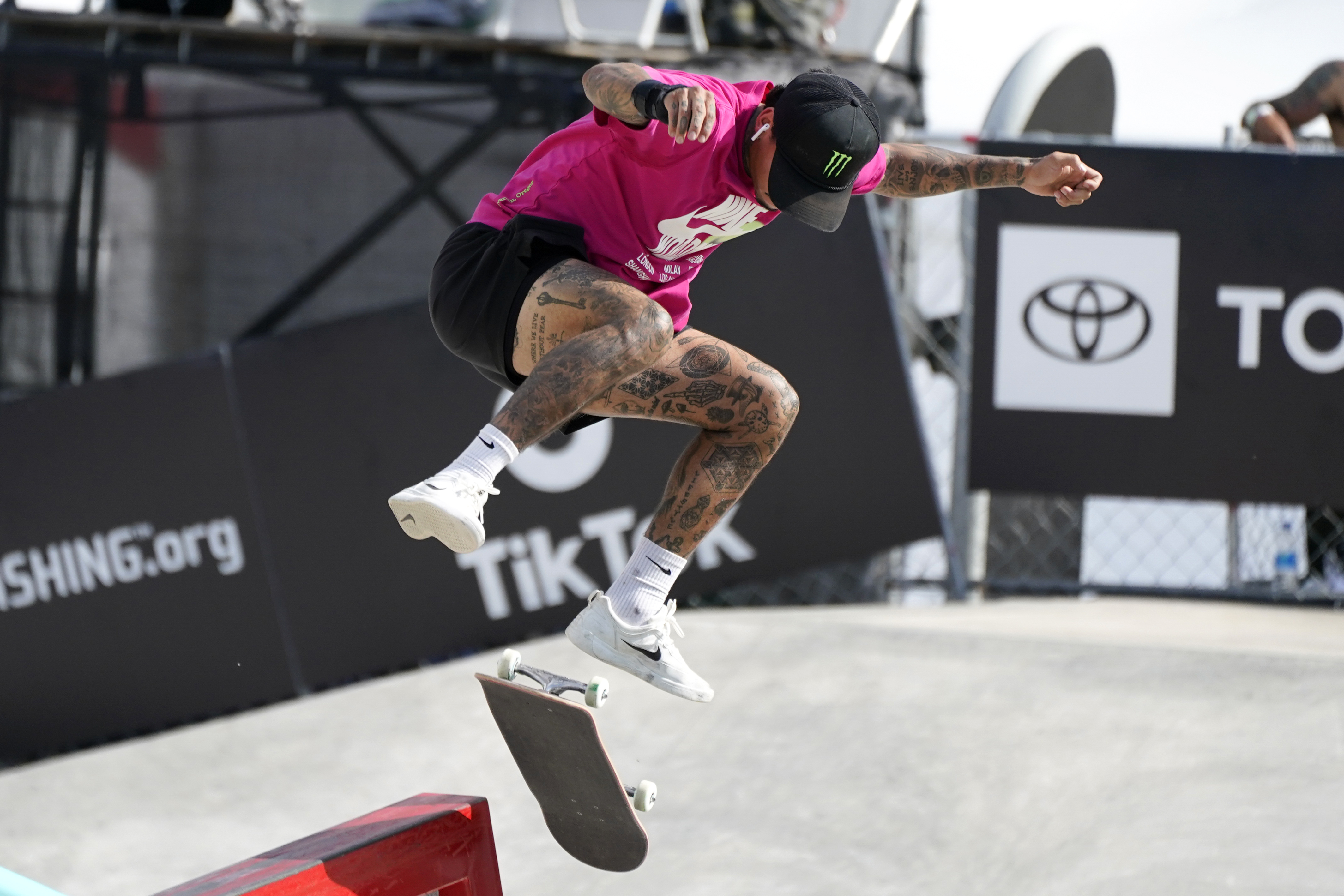 Nyjah Huston, of the United States, competes in the men’s Street Final during an Olympic qualifying skateboard event at Lauridsen Skatepark in Des Moines, Iowa.
AP

You may recognize Huston from some Nike commercials, and that’s because he’s one of the sport’s biggest icons in recent history. The 26-year-old has the most street medals in X Games history, and an Instagram following of nearly 5 million. He is currently the highest paid skateboarder in the world.

Making her debut for team Great Britain, at age 13 Brown will be the youngest Olympian to represent her country for the Summer Olympics. Last summer, Brown suffered a serious accident when she fell from a half-pipe ramp, leaving her with several skull fractures and a broken left wrist and hand.

Everything You Need to Know About the Tokyo Summer Olympics