The Late Alber Elbaz Will Be Celebrated During Paris Fashion Week

AZ Factory, the fashion start-up initiated by the late Alber Elbaz, is to host a celebration of his life during Paris Fashion Week this fall, WWD has learned.

A date and venue have yet to be fixed. The next women’s fashion week in the French capital is scheduled for Sept. 27 to Oct. 5.

The Paris fashion firm, a joint venture with Compagnie Financière Richemont, is also releasing two more product stories this month that were fully realized by Elbaz before his death on April 24 from COVID-19.

SuperTech-SuperChic, one of three fashion ranges unveiled in a variety-show-style film screened online during couture week in January, is to drop on June 12 to mark what would have been Elbaz’s 60th birthday. It will be sold on the brand’s website and also on Net-a-porter.com and Farfetch.com.

Named after the first and last letters in the designer’s name, the fashion house is hinged on projects rather than collections, and with storytelling, problem-solving and entertainment embedded in design, distribution and communications.

For example, SuperTech-SuperChic employs eco-dyed nylon microfiber, typically used for activewear and underwear only, for tuxedos and bustiers, priced from 350 euros to 1,300 euros. AZ Factory dubbed it “athletic couture” that is formal yet comfortable, breathable and seasonless.

Free To is the name of a fourth product story finalized during the designer’s final weeks on the job before being hospitalized. It’s athleisure done up Elbaz style, with raw-edged satin ribbon spelling out “Kiss” on an oversized lavender sweatshirt, for example.

Hinged on hoodies, tops and sweatpants in sustainable fabrics, Free To is described as “mood-boosting” leisurewear bearing messages of escapism and hope, with metallic details in addition to the ribbons, which were a hallmark of Elbaz’s stellar 14-year career reinventing Lanvin.

“In accordance with Alber’s wishes to support LGBTQ-plus youth and desire to encourage all people to be free to love, a portion of the proceeds from the Free To story will be donated to the It Gets Better Project, whose mission is to uplift, empower and connect LGBTQ-plus youth around the globe,” AZ Factory said in a statement released exclusively to WWD.

Also this month, AZ Factory will introduce Elbaz’s first handbag designs for the brand. Made of high-frequency, molded nylon, the bags are described as “modular” insofar as they can be worn crossbody, strung from the shoulder, belted at the waist, or held in hand. They feature an adjustable multistrap and lightweight chain “to allow women to freely hug and feel hugged.” 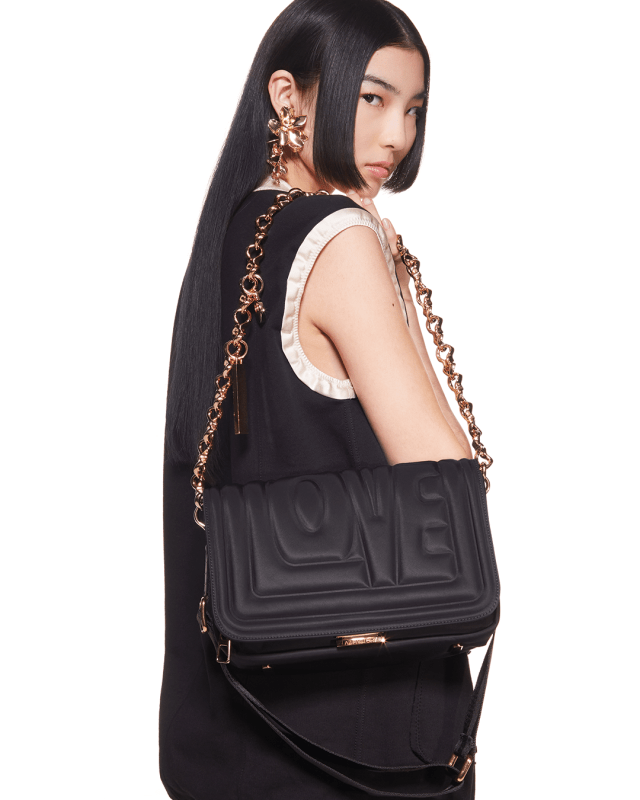 AZ Factory is releasing its first handbag design this month.

“We are humbled and moved to launch the last two product stories he had finalized with the team,” said Laurent Malecaze, chief executive officer of AZ Factory.

Malecaze described the upcoming memorial in Paris as coming together “to honor Alber with a celebration of his life and his visionary work, aiming to bring the same level of passion and love that he brought to us each day.”

Elbaz was laid to rest at the Holon cemetery in Israel, next to his parents, only a few days after his passing.

The fashion world reeled with shock and grief over the sudden loss of Elbaz, best known for his rejuvenation of Lanvin from 2001 to 2015.

An ebullient character prized for his couture-like craft, Elbaz took a five-year hiatus after being ousted from Lanvin before introducing AZ Factory, a venture steeped in his personality, humor and his inimitable flair for soigné fashions.

Born in Morocco and raised and educated in Israel, the designer moved to New York in the mid-1980s. After a stint at a bridal firm, he landed at Geoffrey Beene, working as his senior assistant for seven years.

Elbaz came onto the international radar when he was recruited by Ralph Toledano to helm Guy Laroche in Paris in 1996, a stint that won raves, media attention and the job offer of a lifetime: to succeed couture legend Yves Saint Laurent at the helm of Rive Gauche ready-to-wear in 1998.

After three seasons, Elbaz was fired in the wake of Gucci Group’s takeover of YSL. Elbaz subsequently did one season with Krizia in Milan before sitting on the sidelines of the business for one year. He then landed at Lanvin.

A Look Back at Alber Elbaz’s Most Memorable Quotes